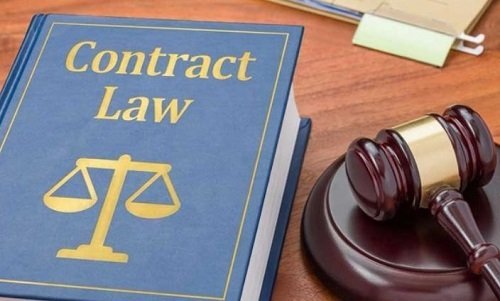 Contract law deals with promises which create legal rights. In most legal systems, a contract is formed when one party makes an offer that is accepted by the other party. Some legal systems require more, for example that the parties give each other, or promise to give each other, something of value. In common law systems, a one sided promise to do something (e.g. a promise to make a gift) does not lead to the formation of an enforceable contract, as it lacks consideration.

When the contract is negotiated, the offer and acceptance must match each other in order for the contract to be binding. These means that one party must accept exactly what the other party has offered. If the offer and acceptance do not match each other, then the law says that the second party has made a counter-offer (that is, a new offer to the first party which then may be accepted or rejected).

For there to be a valid contract, the parties must agree on the essential terms. These include the price and the subject matter of the contract.

Contracts give both parties rights and obligations. Rights are something positive which the party wants to get from a contract (e.g. the right to payment of money). Obligations are something which a party has to do or give up to get those rights (e.g. the obligation to do work).

Remedies for breach of contract

If a contract is broken, the injured party might be expected to demand any of the following:
– RESTITUTION – to have what they gave returned to them
– DAMAGES – compensation for their loss
– SPECIFIC PERFORMANCE – the other party to be forced to perform the contract.
In the common-law tradition, damages is the usual remedy that a court awards for a broken contract. Restitution and specific performance are available only in certain circumstances.

A tort is a civil wrong that can be remedied by awarding damages (other remedies may also be available). These civil wrongs result in harm to a person or property that forms the basis of a claim by the injured party. The harm can be physical, emotional or financial. Examples of torts include medical negligence, negligent damage to private property and negligent misstatements causing financial loss.

There are many specific torts, such as trespass, assault and negligence. Business torts include fraudulent misrepresentation, interference in contractual relations and unfair business practices.

Why some wrongs are dealt with by tort law (or the law of torts) and others considered criminal offences is the subject of some debate. However, there are certainly overlaps between tort law and criminal law. For example a defendant can be liable to compensate for assult and battery in tort and also be punished for the criminal law offence of assault.

The primary aims of tort law are to prove relief for the harm suffered and deter other potential tortfeasors from committing the same harms. The injured person may sue for both an injunction to stop the tortious conduct and for monetary damages.

Depending on the jurisdiction, the damages awarded will be either compensatory or punitive. Compensatory damages are intended, as far as it is possible, to put the victim in the position he or she would have been in had the tort not occurred. Punitive damages are awarded to punish a wrongdoer. As well as compensation for damage to property, damages may also be awarded for: loss of earnings capacity, future expected losses, pain and suffering and reasonable medical expenses.