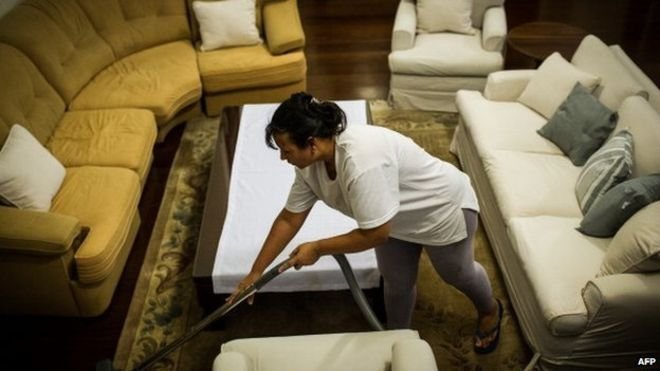 A new law in Brazil has come into force under which employers can be fined if they fail to register their domestic workers.

It is part of new measures to provide basic protection for some seven million domestic workers long excluded from Brazil’s stringent labour laws.

Employers can now be reported and fined several hundred dollars each time they break part of the code.

A constitutional amendment limits domestic workers to a 44-hour week.

It defined other rights as well – basic entitlements such as an eight-hour working day, the right to the minimum wage, a lunch break, social security and severance pay.

Most of these changes have been implemented, but there are still challenges around the government severance fund into which employers have to pay 8% of their employee’s total salary each month.

If the employee is fired without just cause, the employer has to pay a lump sum worth 40% of the pot, plus an added 10% for the government.

Discussions are continuing around how many months’ pay workers will be entitled to if they are made redundant.

The regulation of working hours has had a big impact.

The new legislation has led to many families employing more people to do alternate shifts and some employers are doing more work themselves.

But there are other factors too affecting the domestic worker labour market.

The number of women choosing to go into domestic service is shrinking.

This is because of better access to education and job opportunities particularly in the poor north-east of the country from where many people travelled in search of work.

Domestic workers are asking for higher wages so for many in the middle class the live-in maid is no longer feasible.

People are employing staff by the day and more household chores are being done by middle-class men and women who are also now buying more household appliances.

Brazil has around 7m maids according to the International Labour Organisation, more than any other country in the world.